A National Historic Landmark, the Darwin Martin House was designed by Frank Lloyd Wright in the years 1903 to 1905. Of his many completed structures, the house was the most highly developed design of all of Frank Lloyd Wright’s “Prairie Houses” on the east coast of the U.S. Defined by Wright, prairie houses are “married to the ground,” with a great deal of emphasis on staying low to the ground, building horizontally rather than vertically. Some of the most determining factors of these types of homes could be aspects such as strong geometrical shapes, open floor plans and organic or natural patterns throughout the home, both indoors and outdoors.

This specific home, designed for Buffalo businessman Darwin D. Martin and his family, is comprised of six interconnected buildings, “designed as a unified composition,” with the “landscape design for the grounds of the estate is deeply integrated with the overall composition of buildings.” It is said that Darwin did not have a budget for the home, so the result was a large property designed as an open floor plan where every room in the home has a spectacular view. The home consisted of a beautiful, large main house for Darwin and his wife, a conservatory, a garage-stable, a breathtaking pergola to connect the buildings, a gardener’s cottage and a separate house for Darwin’s sister and brother-in-law. On the interior, notable design details are the large, extensive central fireplaces and multitude of “Wright-designed art glass windows.” One of the most commonly known and famous glass windows designed by Wright also lives in the house, the “Tree of Life” design. As he managed to do with several other projects, Wright once again seamlessly incorporates the house into the natural surroundings, creating a beautiful structure that, as stated before, impresses simply in its organic beauty.

The renovations to the Darwin Martin House were completed last year, which included a new visitors/interpretive center, designed by Toshiko Mori, as well as a “floricycle,” with Wright design influence, that blooms in Buffalo’s blooming season.

Throughout the decades, the Martin House slowly suffered deteriorations over the years and three of the original five buildings had to be demolished. A complete restoration of the of the property began in 1997 and continues to be ongoing today. Part of the restoration process was the Eleanor and Wilson Greatbatch Pavilion, a visitor and interpretive center, with lighting provided by KLIK USA.

For more photos of the Darwin Martin House, our photographer Matthew recently released an article about the property! You can read it here. 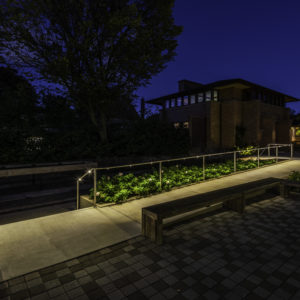