In the 1800s, the great landscape architect Frederick Law Olmstead recognized that access to open lawns, pathways, water, and groves of trees was a critical element of wellbeing for people living in cities; places which were often crowded, unhealthy and polluted. He revolutionized park development and landscape design in America, creating some of our most celebrated urban spaces like New York’s Central Park and Milwaukee’s Washington Park, to name a few.  He intended these parks to be spaces that would “civilize, inspire and elevate the citizenry.”

During the late nineteenth and early twentieth centuries, many major urban parks developed throughout the United States were modeled after Olmstead’s ideas, with open and flexible spaces available to users to recreate in any manner they liked.

Fast-forward a few years, and park development in America began to change with urban sprawl. From about 1930 through the 1970s, public spaces were much more defined by their use, and smaller parks were favored, each with specifically-designated areas for tennis courts, sports fields, playgrounds and community centers. Particularly in developing suburban communities, wide open spaces in parks became more rare in favor of recreation-oriented, highly scheduled specific uses of space. This was the dominant standard of park design when the city of Bellevue, Washington acquired nearly 20 acres of land within the Bellevue Central Business District in the early 1980s. City leaders bucked the trends in park design and recognized the opportunity to create a significant public space that would be unique and influential – an Olmstead-inspired refuge to escape, contemplate, recreate and socialize. Leaders also realized that a grand park of this scale could create an important focal point for the community in this then rapidly-expanding “edge city” near Seattle. Today, the many users of Bellevue Downtown Park would have to agree that the city met and exceed its goal. People and dogs walk and jog along a half mile path surrounding a circular canal. A ten-acre lawn is perfect for a game of catch or a picnic, as well as major community gatherings like the annual 4th of July celebration – complete with sweeping views of Bellevue’s skyline and Mount Rainier. There are mature shade trees and formal gardens for meandering, as well as a newly-installed “Inspiration Playground,” which is fully accessible for all ages and abilities. All of this is available in the midst of a thriving downtown. KLIK played a part in the recent renovation and expansion of the park, which fully realized the 35-year vision of the original park planners. A grand entry was added and the circular promenade around the canal was completed. New terraced seating overlooks a reflecting pool, cascades and waterfall. KLIK LEDpod™ 50 lighting was installed throughout the handrails on the terrace so that day or night, users can enjoy a respite from city life in this oasis just steps from downtown. KLIK is proud to be a partner in creating spaces that enhance communities, like Bellevue Downtown Park. 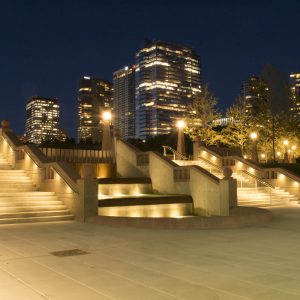 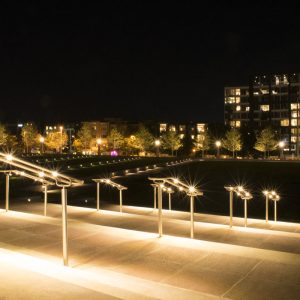